Dominance in Dogs
Debunking the Myths of Dominance Training 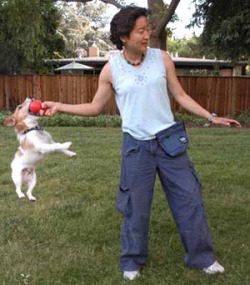 When dealing with difficult dogs in the hospital do you just have to dominate them and teach them who’s boss to get them to behave? If your dog barks or growls or misbehaves should you throw him on his back in an alpha roll and reprimand him face to face?

When a pet greets you by jumping or rushes out the door is he vying for higher rank?


Fifteen years ago when I was just starting in practice, I and most other veterinarians would have answered, “Yes.” Almost two decades later the scientific understanding of dominance theory and social structure of dogs and their wolf relatives is making its way into the mainstream. As a result myths about dominance are being debunked and veterinarians, technicians, and trainers who have used dominance theory to guide their dog-human interactions are rethinking their techniques.


One major myth debunked by our updated scientific knowledge is that dogs misbehave generally because they are seeking higher rank, or are trying to be dominant. According to the American Veterinary Society of Animal Behavior’s (AVSAB) recently released position statement The Use of Dominance Theory in Behavior Modification of Animals, dominance theory has limited use in animal training and rank is rarely the motivation behind the bad behavior.

Dominance in dogs and other animal social groups is defined as a relationship between individual animals that is established by force/aggression and submission, to determine who has priority access to multiple resources such as food, preferred resting spots, and mates (Bernstein 1981, Drews 1993). A dominance-submissive relationship does not exist until one individual consistently submits or defers. The majority of behaviors pet owners want to modify, such as excessive barking, unruly greetings, and failure to come when called, are not related to valued resources and may not even involve aggression. Rather these behaviors occur because they have been inadvertently rewarded and because alternate appropriate behaviors have not been trained.

Says E. Kathy Meyer, AVSAB president, “ Behavior modification and training should focus on the scientifically sound approach of reinforcing desirable behaviors such as sitting when greeted and removing rewards for undesirable behaviors such as jumping on people for attention when greeting them.” Reinforcers for such jumping include, petting, yelling, pushing the dog away, or playing with the dog.

This focus on a more scientific approach rather than one based on an antagonistic relationship affects not only the dog’s long term well-being, but also the owner’s safety. When using dominance theory as a guide, owners tend to meet resistance with force and this can lead to human injury.

Says AVSAB past-president Dr. John Ciribassi, “A typical scenario is a client with a 3 year old dog who has presented because of aggression directed at strangers that the dog meets either on walks or when guests come to the home. Initially the dog barks at people as they pass and backs away if approached, indicating that the aggression is due to fear.” Ciribassi continues, “The dog is referred to a trainer who suggests the dog be fitted with a pinch collar and be given a verbal and physical correction with the leash. Because the dog now feels pain when it encounters the person it fears, the aggression escalates.” As a result, now the dog lunges, snaps, and bites in situations where it used to bark and back away. Ciribassi adds “In some cases the dog is so aroused it learns to redirect its aggression towards humans.” Some owners may also incorrectly try to pin a dog on its back and reprimand it if the dog has misbehaved in some way. This treatment is based on an incorrect understanding of what happens in the wild. For decades trainers have assumed that higher ranked wolves pin lower ranked ones in this alpha roll as a powerplay. In reality, it’s not the higher ranked wolf that forces the lower one down, rather the lower ranked one offers this ritualistic posture as a sign of deference the way one might bow or kneel before royalty. Consequently a more appropriate term for this posture would be a submissive roll (Yin 2009).

Indeed wolf biologists rarely, if ever, even use the term alpha to describe the leader of the typical wolf pack in the wild (Mech 2008), much less a body posture. Says prominent wolf biologist David Mech, “Rather than viewing a wolf pack as a group of animals organized with a ‘top dog’ that fought its way to the top, science has come to understand that most wolf packs are merely family groups formed exactly the same way as a human family.” That is maturing males and females from different packs court, mate, and produce a litter of pups. These adults naturally fall into a leadership role.

As the trend towards using dominance theory fades people may ask “What about leadership?” The AVSAB stresses that dominance and leadership are not synonymous. Leadership, or the ability to influence individuals to perform behaviors they would not necessarily perform, can be gained without force by:

By dispelling the old rules of dominance in dogs and following the new guidelines of leadership, veterinarians and their staff can better handle patients and guide their clients towards proper training.