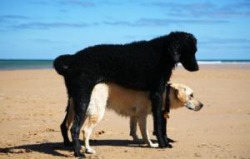 The social structure of domestic dogs is often simplistically described in terms of a linear dominance hierarchy, in which the topdog, or “alpha animal”, is dominant over all lower ranking animals, the second ranking dog is subordinate to the topdog but dominant over all others, and so on down to the lowest dog on the totem pole. Moreover, it is popularly believed that rank is established and maintained by physical strength and dominant behavior, that the more dominant (i.e., higher ranking) dogs are more aggressive and that the most dominant dog is the most aggressive. Hence, dogs that frequently threaten, growl, fight and bite are often assumed to be “alpha” animals. The majority of the above assumptions are quite awry. Nothing could be farther from the truth. Such a simplistic view of a most sophisticated social structure is an utter insult to dogs but more disturbing, when cavalierly extrapolated to dog training and the dog-human relationship, such bizarre notions are ineffective, counterproductive, potentially dangerous and quite inhumane.

Social Rank and Aggressiveness
It is generally assumed that high rank is correlated with aggressive behavior. In reality, a growly, macho topdog is a rare find. Topdogs rarely growl — they seldom need to! The true topdog is usually a pretty cool customer, who is secure and confident of his privileged position and has absolutely no need to fluster and bluster to bolster up his rank. Basically, "If you've got it, there's no need to flaunt it." A true topdog is more likely to share a toy, a bone, or a sleeping place, than fight over one. On the other hand, bottom-ranking dogs rarely growl either. The prime directive of a low-ranking individual is to maintain a low profile. Barking, growling and snarling only draw unwanted attention and if it came to a fight, the underdog would most certainly lose.

A topdog has little need to threaten and an underdog would be crazy to. Without a doubt excessive growling and repeated fighting is indicative of underlying insecurity and uncertainty about social rank vis a vis other dogs. Within a social group, protracted, blustery displays of aggression are the hallmark males especially in the middle-order of the hierarchy. Middle-ranking dogs threaten more and fight more frequently than higher- or lower-ranking individuals. What most people describe as an “alpha” dog is usually an insecure middle-ranking male.

Subordinance Hierarchy
When the framework of a successful hierarchy is viewed in a developmental context, it becomes apparent that “subordinance hierarchy” is a more descriptive and accurate term for canine social structure. This premise was first suggested by English primatologist, Dr. Thelma Rowell. Maintenance of an existing hierarchy depends on the underlings’ respect of the position of older, higher-ranking individuals. The status quo is maintained because, lower-ranking individuals are seldom physically or psychologically capable of challenging authority and so, only occasionally, is there need to enforce higher rank with a physical display, or more likely, psychological “dominance”.

Development of Hierarchies
In view of their smaller size and inferior physical and psychological strength, young puppies simply cannot compete on the social scene when growing up around larger pups, adolescents and adult dogs, Thus, puppies learn their station in life well before they become sufficiently large and strong to be a threat to the established order. Most adult dogs are quite lenient with young pups until they approach adolescence, whereupon adults (males especially) relentlessly pursue, stand-over and growl at the adolescents (males especially). Even so, harassment by adult dogs is largely psychological, rather than physical. It would be a perversely under-socialized adult dog that physically beats up young puppies, adolescents, or lower-ranking adults. And it would be a woeful uninformed human who might try and emulate such fictitious behavior under the guise of dog training.

Nonetheless, during this crucial stage in hierarchical development, young pups and adolescents are extremely intimidated by the incessant harassment and consequently, they learn to respond with exaggerated appeasement gestures to assuage the torment from their elders.  Moreover, puppies and adolescents quickly learn, that bother from older dogs may be largely prevented by taking the initiative and demonstrating active appeasement before they are harassed. The pups' preemptive apology characteristically comprises a low slung, wiggly approach with ears back, submissive grin and tail and hindquarters all a wag. The youngster may paw the brisket and lick the muzzle of the older dog. (The infantile pawing and muzzle-licking food-soliciting behaviors of puppyhood now acquire new meaning and are retained as neotenic appeasement gestures in adolescence and adulthood.) In addition, the underdog may roll over and lift a leg to expose his inguinal region. Some may submissively urinate. Adult dogs may determine the age of a puppy or adolescent from the smell of the youngster's urine.

From this stage on, to maintain harmony on the social scene, higher-ranking dogs need only chastise those individuals that do not voluntarily show deference and respect in their presence. However, even this is usually done with nothing more than a cold, penetrating stare.

Maintenance of Hierarchies
Fighting and physical dominance very rarely come into play during the maintenance of hierarchies. On the contrary, the major function of hierarchical structure is to lessen the amount of fighting. Once established, the hierarchy provides many of the answers before the problems crop up. For example, when there are two dogs but only one bone, the ownership of the bone is pre-decided and therefore, there is nothing to fight about. Potential problems are similarly pre-settled in established human hierarchies. For example, in a large corporate hierarchy, the problem of a single parking place and two cars — the CEO's Rolls and the Assistant Sales Manager's Ford Escort proves no more of a dilemma than when the CEO was Sales Manager and drove a Jaguar and the ASM was a secretary in the typing pool and drove a beaten-up VW. I mean, who, in their right mind, would park in the boss's parking place. No one ever does, hence no problem. It’s similar with dogs.

People’s misunderstandings about the relationship between rank, dominance and aggression tend to exacerbate fighting problems, which are largely the product of asocialization, the mixing of socially ill-unprepared adult dogs and inappropriate feedback. In addition, erroneous notions of canine social behavior tend to foster macho owners, who allow and/or encourage their dogs to snarl and growl, thinking they have a reeal baaaad dog! This sort of person — usually an adolescent male (5-70 years old), wearing a single black glove, baseball hat on backwards and owning a male dog of only half a dozen breeds — can be a bit of a 'pain in the class'. However, it is sometimes possible to get this wally to wise-up with a compliment/insult like: "Hey! What a wonderful dog! I’ll tell you, I know Pitweilers… and this is a gorgeous dog. But what a shame he's so growly. Well if you like, perhaps we can build up his confidence and turn him into a top dog. Because top dogs don't growl you know, they don't need to." I never cease to be amazed at how many potential jerks are, in fact, wannabe responsible owners once they are wised-up in this manner.

Extrapolation of Pure Silliness to Ineffective Dog Training
Unfortunately, the real danger of the alpha-concept of physical dominance lies in its questionable extrapolation to dog training and husbandry. Instead of being educational, many so-called “training” methods are just downright adversarial if not abusive; the dog is often viewed as our enemy, rather than as our best friend. Why on earth would we ever treat our best friend like our worst enemy?

Many playful, greeting and fearful gestures are misinterpreted as being aggressive, providing the unthinking owner with a convenient excuse to abuse the dog under the guise of “training”. Snapping, pilo-erection, growling and lip-curling are often misconstrued as signs of “dominance”, whereas they are, in fact, more usually signs of fear — most probably the direct product of a person pounding on the poor dog. Similarly, owners are advised that urine marking, mounting people, stealing food, jumping-up and prolonged eye contact are all signs of dominance, for which the dog should be punished and physically dominated. Some ill-advised, big blue meanies are confusing issues and trying to take the fun out of dog ownership. In my book: 1. A dog that marks indoors, needs to be housetrained, 2. A dog that mounts people needs to be instructed to cease and desist and most probably requires social introduction to another suitably inclined furry quadruped, 3. A dog that steals food is in desperate need of an owner who remembers to put food away. 4. A dog that jumps-up simply needs to be taught to sit when greeting people, and 5. A dog that is tricky about eye contact should be taught that human eye contact is no threat and to learn (be taught) to lovingly gaze in the eyes of his understanding owner.

Certainly, we need to control dogs — but mental control is what is required, not physical domination. Even though an ill-experienced, middle-ranking dog “handler” might be able to jerk, hang, roll-over, and/or beat a dog into submission, what is the point of winning the battle and losing the war? What possible advantage is there in converting a so-called “dominant” dog into a fearful one? Both are equally as worthless as companions or working dogs. Furthermore, (luckily) most physical corrections are well beyond the physical and mental capabilities of all but a few dog owners, many of whom are children. And so, why advise novice owners to enter into a physical contest that they are bound to lose? In fact, why abuse the dog at all, when it is possible to achieve the same end using brain instead of brawn? Why try to wade the Atlantic when one could take a plane?
We must prescribe training methods that are both effective and expedient — methods that lie within the capabilities of the average dog owner, including women, children and the elderly. If we have learned anything at all from studying dog behavior, ... owners must establish control in a developmental context, while the dog is still a puppy.   Rather than browbeating an adult dog into submission, it is far easier to convince a puppy to join the team, so that he enjoys life living with us, rather than fighting against us.